A (belated) Review of Hessaret's Treasure I've been meaning to review this Mythras scenario since I ran I more than a year ago, but somehow, I'm only now getting around to it ... full disclosure: I'm working on a few small, Mythras-related projects with its author Matt Eager, but that's actually only because I've reached out to him after reading and playing the scenario. Also, this review is based on the German translation of it.

I'm not going into details here, but still,

Email ThisBlogThis!Share to TwitterShare to FacebookShare to Pinterest
Labels: Mythras

Some thoughts on OpenQuest 3rd Edition

I'm having trouble with reading through the third edition of OpenQuest. The thing is, this new edition warrants a complete re-read, but since I feel that I know most of it from 2nd Edition, I keep leafing back and forth for the new stuff. And the new stuff is good, good enough to convince me that OQ3 is both the best expression of OQ yet and probably also the best rules-light take on BRPish d100 mechanics out there.
Read more »
Posted by Swanosaurus at 8:11 AM 2 comments:

Email ThisBlogThis!Share to TwitterShare to FacebookShare to Pinterest
Labels: OpenQuest

A Legacy of missed Opportunities

By the end of this review, I well tell you that Legacy of Blood for vsD is worth buying - after picking it apart in bloody pieces. Really, I'm positively angry about many things this scenario does, BUT it features a great premise and enough material to actually make it work. This could be a great, complex, atmospheric scenario about falling from grace (and maybe rising again) - instead, author Jonathan Hicks for some reason decided to write LoB as a railroaded mediocre dungeon romp that doesn't make much sense. It's a mystery, and not one of the good kind, but it leaves enough to be salvaged and turned into something beautiful.
Read more »
Posted by Swanosaurus at 9:42 PM 4 comments: 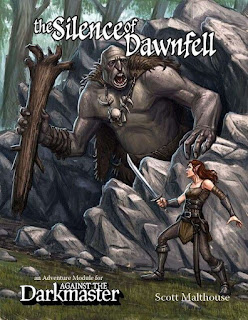 I fear that I might be a little unfair towards this adventure: It is a good one, but I'm reading it right on the heels of Shadows of the Northern Woods, which is a tough act to follow. Especially since a lot of motives and themes of Dawnfell are reminiscent of SotNW: Again, there's a small village to be saved, free folk who have become estranged from each other and must be brought back together, a magical McGuffin that the bad guys are after and a climatic battle where the outcome depends hugely on how many checkmarks the characters were able to make on their adventurous to-do list in advance. In both adventures, we have spiders in the woods and ancient burial sites hiding treasures and answers. Even some of the NPCs feel like variations on a theme when compared to SotNW (Annis/Beltine, Wulfric/Brynjar, Morcant and his She-Wolf/Urgusk and his Mountain-Lion). It's hard to say if, playing both scenarios back to back in an actual campaign, this would feel like a thematic throughline or rather like "Oh well, another troll with a vicious pet and another problematic thane."

But while SotNW uses its sleepy, rural setting as a springboard to dive deep into the (admittedly vague) mythology of vsD's implied setting, Dawnfell firmly sticks to being an adventure about saving a village from a band of trolls. Which is actually a good thing, because it makes Dawnfell truly self-contained and also thematically more suitable for a group of 1st level characters. As such, one might say that Dawnfell is better at being what it is than SotNW, but it is also a little less impressive.

Read more »
Posted by Swanosaurus at 11:25 AM No comments:

In my previous post, I was singing the praise of the classic Iron Crown Enterprises scenario structure, and since Shadows of the Northern Woods, the mini-campaign included in the corebook of Against the Darkmaster, follows similar design principles, I'll just jeep on singing.

Shadows of the Northern Woods (SotNW) is a joy to read. It hits exactly my sweet spot between creating a sandbox environment, but also giving lots of support for the three interconnected scenarios provided (much more support than the old MERP modules usually offered). More importantly, it really makes the environment come alive; it's a small setting, basically a village and the surrounding wilderness, but it's brimming with NPCs, factions, unique monsters, history and current events.

The Great Modules of the Late Terry K. Amthor

Terry K. Amthor is a name that means a lot to me, even though I've read only very little by him, and played less. His main creation, Shadow World, sits alongside several high-concept setting that I have heard of again and again and that I never found the time to delve into - along with Tekumel, Talislanta and Glorantha (though I've actually found my way into Glorantha a few years ago).

So, I'm finally ready to finish my series on vsD; on to vsD's GM chapter, which gives some generally good advice on game-mastering and designing scenarios and tools to deal with stuff like war and battles, powerful magic items, or the taint of the Darkmaster, an also presents three possible Darkmasters. None of this is groundbreaking, but again, vsD keeps its sight firmly set on creating highly thematic rules and tools for an epic fantasy rpg.

Read more »
Posted by Swanosaurus at 7:14 AM No comments:

Email ThisBlogThis!Share to TwitterShare to FacebookShare to Pinterest
Labels: Against the Darkmaster
Older Posts Home
Subscribe to: Posts (Atom)