Ashen Stars: Hidden Depths is out! So, there it is: my first published RPG scenario in about 20 years, and the first I have ever published in English. It is for Pelgrane Press's investigative science fiction game Ashen Stars and published as part of it's brand-new Gumshoe Community Content Program. Hidden Depths is my take on hard-ish high concept science fiction within the framework of a setting inspired by TV shows like Firefly, Farscape and nuBSG.

It features an ice moon, underwater aliens that I consider to be reasonably alien (although morphologically, they're based quite closely on a type of sea-slug from good old earth), a non-personal threat inspired by a Greg Egan novel and a bunch of bad guys that would feel quite at home in an episode of Farscape (tonally, I've come to associate Ashen Stars closely with the wacky dramatics of Farscape - that's how it somehow always turned out at our gaming table).

So why should you check it out? If you play Ashen Stars, you'll probably do so anyway, since there's far too little scenario material out there for it. I had the privilege to get a lot of feedback from the people at Pelgrane Press, who helped me to (hopefully) make this adventure as complete as needed and as concise as possible. It follows the classical scene structure of most published Gumshoe adventures, creating a network of essential and optional places and events. If you're not familiar with how Gumshoe scenarios are structured, it might help to think of them as point-crawls: They give you a map, but it's not a map of how to get from one location to another, but how to get from one information to another. How you use this map is up to you - Hidden Depths is fairly non-linear and open-ended. The characters will spend some time figuring out what is going on, and then it's basically up to them, with a number of suggestions provided by the scenario and no "right" or "wrong" choices.

Hidden Depths profits from some great cartography work by Ralf Schemmann (who also did a lot of the official Ashen Stars ship blueprints for Pelgrane Press) and from original art by Carolin Kohler. (I'll take this opportunity to express my deepest gratitude to both of them!)

Here's one of Caro's illustrations for Hidden Depths: 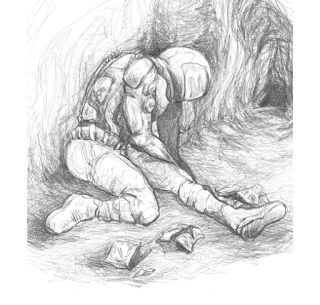 Posted by Swanosaurus at 2:03 PM